We were delighted that the RKD entry in the recent The Metals in Construction Magazine 2021 Design Challenge was chosen by the Jury as the Grand Prize winner.

The competition brief asked architects and engineers worldwide to envisage solutions for a site within Sunnyside Yard, 140 acres of public land and the largest public development project in New York for over 100 years. The plot, which was the focus of the competition brief, is located between Queens Boulevard and Honeywell Street in the New York borough of Queens, and involves the building of a new neighbourhood over a working rail depot. 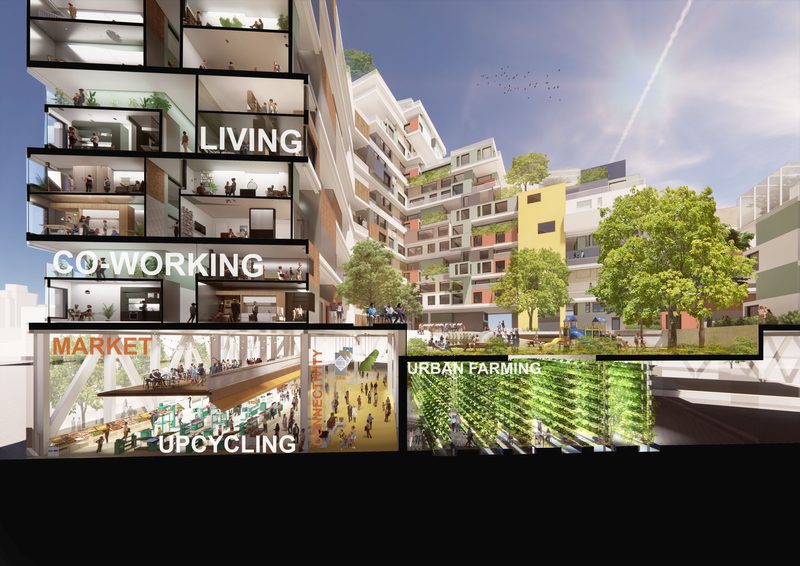 The competition challenged us to design an affordable and sustainable community with healthy, resilient and productive places that would allow people to thrive.

In response to the brief, our design sought to create a community for current and future generations, an adaptive framework for an evolving, resilient city that is capable of sustaining its own ecosystem by preparing for future changes in our climate.

We sought to build a community that would fit seamlessly into the existing fabric of Queens in a positive way with pedestrian access and permeability. The streets and blocks would provide a variety of urban opportunities unified by greenways, landscaping and an elevated walkway. It was important that this wouldn’t become an island in the center of Queens but rather would be unified with the wider area. 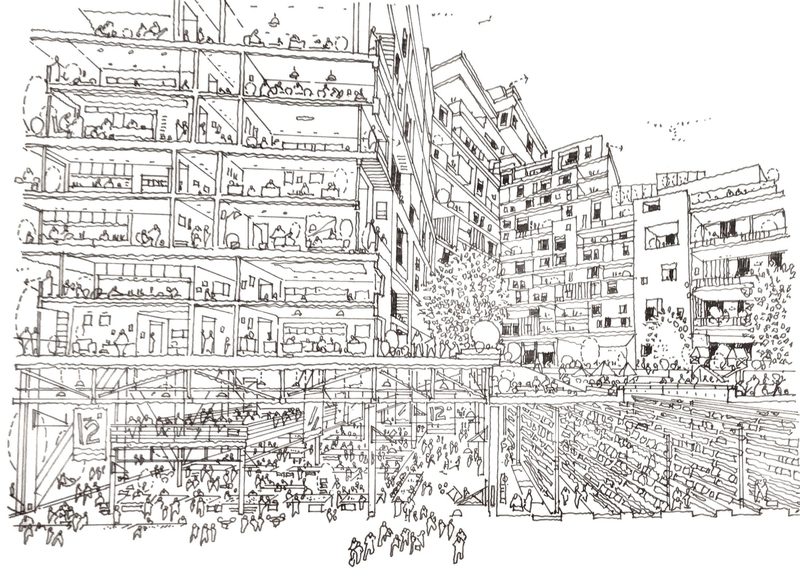 RKD has an initiative called Better Buildings of the Future, focused on incorporating sustainability from the inception of a project, from the time of the first sketch, rather than trying to weave it in as an afterthought in the final stages. The Better Buildings of the Future approach is the lens through which we look at all our projects. It allows us to research and explore the ways design, operations and behaviours within the places we live, work, learn and play can be optimised for health and well-being.

Our design for Sunnyside Yard had sustainability at its core from the innovative building solution proposed, our consideration of location and the way in which space is maximized throughout the development. The materials proposed were 90% recyclable, renewable energy generated from solar panels on roofs, and excess heat from the rail yard captured for winter pre-heating. To enable productivity for a self-sustaining environment, we included spaces for aquaponic food production, for greenhouses and roof terraces with green spaces within each block. 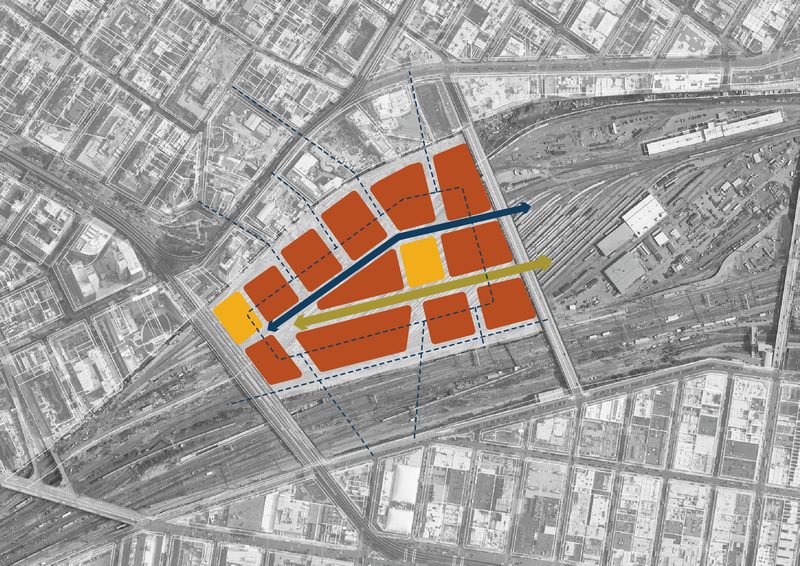 When we looked at the existing master plan for Sunnyside Yard, we were struck by the uniformity of the grid across the entire length from east to west. The design considerations included how our proposal would respond to that uniformity, how we would ensure and maintain good daylight and sunlight penetration, and how we would align the building footprint with the rail lines below. 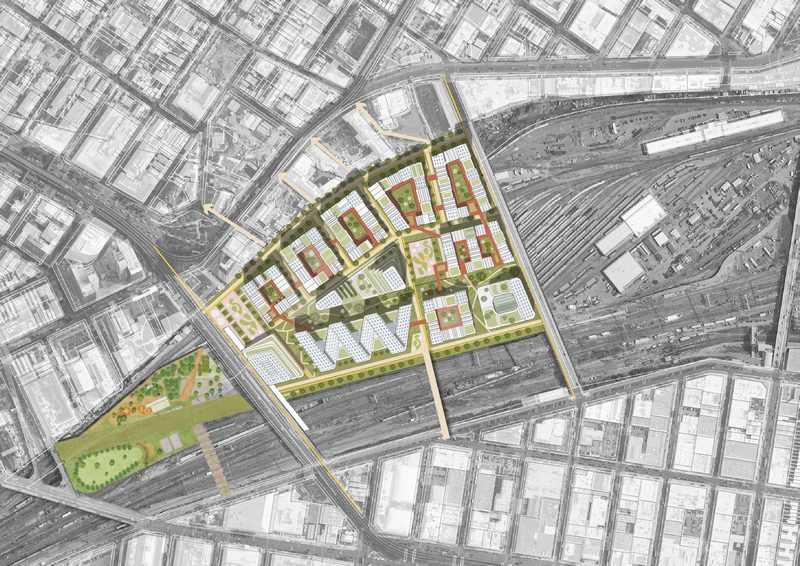 By shifting the orientation slightly and adjusting the heights of the buildings, the residential buildings would receive the optimum sun and light level. This arrangement of buildings would also allow cool breezes to pass through in the summer but block the colder ones in the winter, therefore protecting inhabitants from New York’s extreme weather cycles throughout the year. 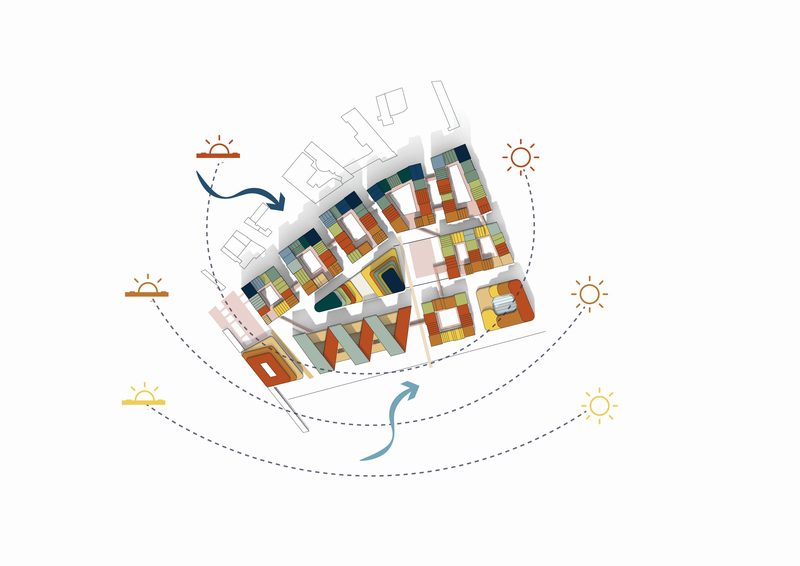 We sought to apply ‘Passive House Principles’ in our housing designs. The key elements of which are:

All of which were considered and employed in our design entry. 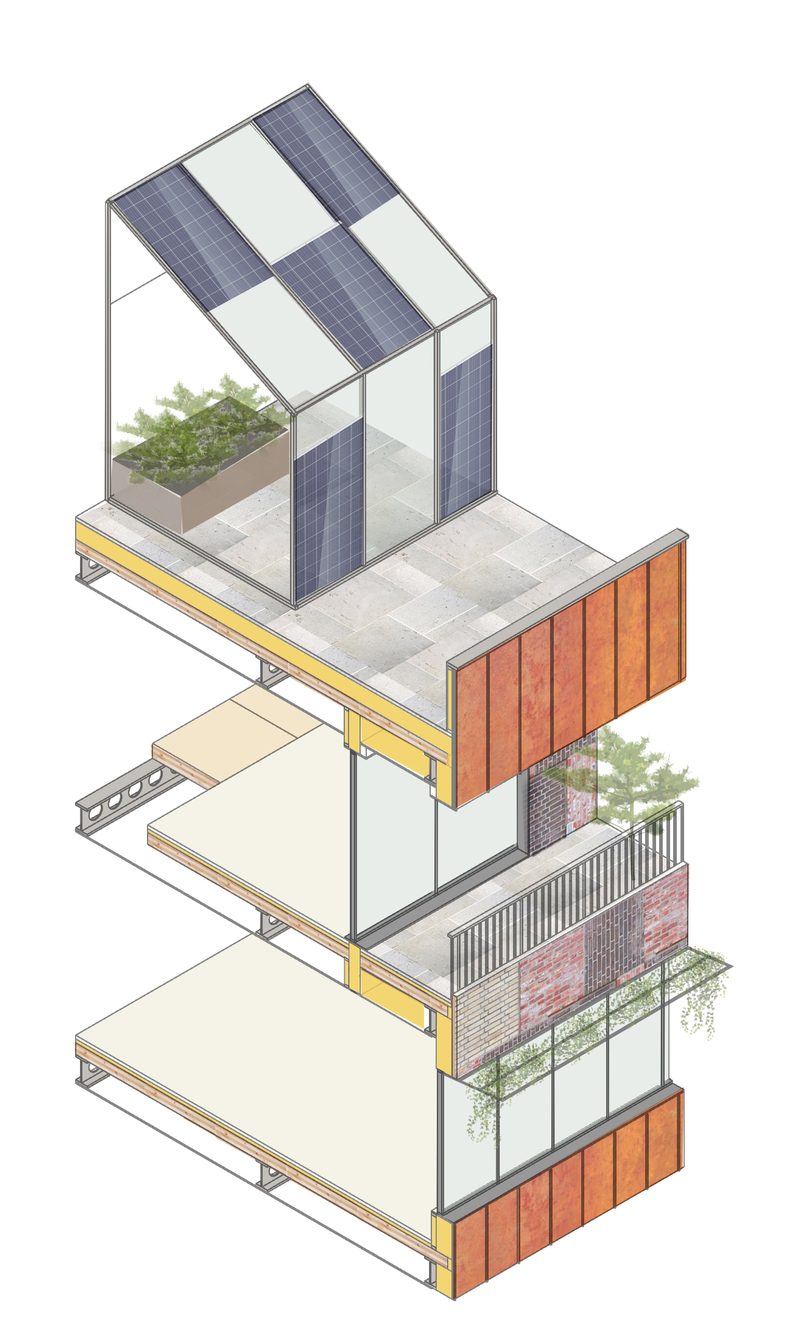 A specific request of the brief was to look at how using steel, as part of the concept, might assist in creating both a carbon efficient building but also a circular economy. We proposed a timber-steel hybrid as the structural system which allowed for future flexibility in terms of assembling the building and then reusing all the components again. What makes this particularly efficient is the steel plants that are based around New York, allowing us to source materials locally and minimize the carbon footprint of future construction. We estimated that the timber-steel hybrid in our proposal could reduce the carbon footprint of a typical concrete structure in New York by 52%. The timber-steel hybrid also allows for more flexibility in the heights and movement, which is helpful when you are building above a railway.

The competition brief wove together structural, urban design, environmental, costs, and social challenges. It challenged RKD to develop new thinking about neighbourhoods and cities to make them inclusive, adaptive, resilient, and productive, vibrant, compact and connected, as well as low carbon, smart and embracing of the circular economy. While there is no immediate intention to build, our success is embedded in the recognition of our ideas and how they can be transferrable to other projects in the future, internationally and, in Ireland.

This site uses cookies to improve the user experience. By your continued use of this site you accept such use. Learn more. OK